Recently speaking with music producer, Ronnie Notch, I was informed about a very talented hip hop artist with an amazing personality. “He’s the real. When it comes to music he’s definitely not the norm.” says music producer Ronnie Notch. After this I knew I had to meet this guy. A week after hearing about the rapper, I then received tragic news. This amazing rapper, lost two loved ones in the midst of building his music career. But what I noticed is he pulled through, worked diligently and exuded that bright personality with no hesitation. The wild thing about the interview below is that this rapper actually uplifted me with his warm spirit and sense of humor. I introduce to you, Woody Wood. 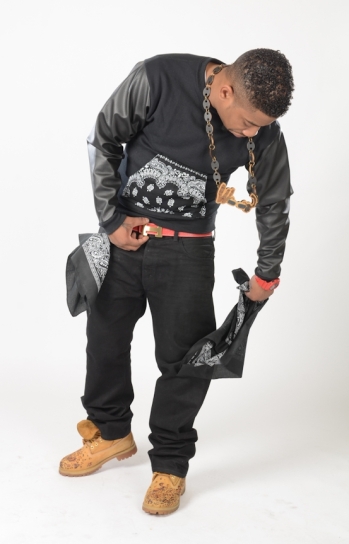 The Wire Hanger By Winnie: Hey Woody! Thank you for making time to speak with me today. So first I am curious, are you from St. Louis?
Woody Wood: Yeah Yeah! I’m from the north side. From the city then moved to the county and graduated from Hazelwood East High.
TWHBW: Woody Wood is a name that no one can forget. Where does your name derive from?
WW: From my uncle, back when I played sports. He called me Woody because he said I reminded him of his partner in the army. And whenever I played at a game, my mom would have Woody’s Mom on the back of her shirt so then that’s when my nickname really became popular.

TWHBW: What inspired you to become a hip hop artist?

WW: I heard Kanye’s The College Dropout and it kinda did something for me. I used Through the Wire instrumental to write my first song. I have always loved music though.

TWHBW: What’s your thought about music today?
WW: You can’t listen to albums from Track 1 to Track 10 anymore. When listening to an album it needs to be like a movie.

TWHBW: When did you first fall in love with hip hop?
WW: I think I fell in love twice. [laughs] Like we broke up and got back together. But my first cassette tape was Crossroads from Bone Thugs N Harmony. But what grabbed me was that Lauryn Hill Miseducation. She had me thinking I could sing and rap {laughs}.

TWHBW: What’s your take on using the N word in Hip Hop music?
WW: It’s a lot I could say. I could talk about how I caught a case or getting locked up. Its just certain stuff you shouldn’t talk about if you haven’t been through it. If you don’t know what being a nig** look like on a good or a bad day, you shouldn’t say it. Its just like if somebody called you by your nickname and they didn’t know you.

TWHBW: How would you describe yourself as a artist?
WW: [laughs] A educated street n** that love women.

TWHBW: What are you listening to right now?

WW: I listen Motown music all the time. I listen to those classics to hit Ronnie [Notch] up and say, ‘Aye man sample this’. Listening to real music like that makes me want to write. I feel like if you channel what was a hit back then, you’re bound to make a hit now.

TWHBW: What was the first CD you ever bought?
WW: Lauryn Hill ft D’ Angelo Nothing Even Matters. In some of my music I try to channel Lauryn and D’ Angelo and a lil’ Mint Condition.

TWHBW: So about this hot song of yours, House Party, what inspired it?
WW: Ronnie hit me with the beat, and I channeled all the versions of the classic House Party movie series.

TWHBW: So what is your ideal house party?
WW: Hand picked, people that I want there that actually show up. Of course there would be drinks, food and ladies for days. [laughs] Stevie Wonder would be on the piano, Jamie Foxx would be there just to crack jokes and George Clinton will be there keepin it funky.

TWHBW: Well it sounds like you have it all planned out! For artists coming up or just someone who is interested in taking their love for music to new heights, what would you advise?

WW: Don’t expect for anyone to put just as much effort in you like you do. You just gotta go get it.

TWHBW: Is there anything else you’d like to say before we close this interview?
WW: You’re coming to the house party right?
TWHBW: [Laughs] Yes I will.