The trip was planned about a month ahead of time with no one knowing about it except for my mother, brother and close friends. It was originally to get away. Then, at the last minute I was asked to interview a couple people while away,such as comedian Special K of The Rickey Smiley Morning Show. So then I decided that we’d work hard and play harder. We then made our itinerary to get my interviews done, try great southern food and party.

Randomly, 5am Friday morning, driving from St. Louis, a scene from T. D. Jakes “Jumping The Broom” randomly popped in my head. In the romantic comedy, Paula Patton is a single woman fed up with losers. The movie opens with her getting disappointed of dealing with a jerk so she then prays to be released from the bad situation she’s in and she states that she will be obedient so that way she can meet her husband. After thinking of this scene, I then decided to pray. I was over the single life. I didn’t want to rush into anything false but I was eager to meet someone of my full liking, someone who’d treat me as I deserve plus more. I simply asked God, without the intention of immediate response, if there was a man on my way into ATL that was meant for me, to please reveal him. I will admit, I met a couple of guys. But One was different.

Me and my girl were partying at Aurum night club,

and this guy walks up, asks for my number, very mannerable so I gave it. We didn’t even dance together, haha. That Sunday we were leaving and I received a text, “Hey this is Donovan from Aurum. Is this Winnie?”

Instantly we clicked. We spoke every night before bed and every morning before work with no problem. Topics from beliefs, morals, jokes, families, lifestyles, entertainment, goals, aspirations, embarrassments, flaws and mistakes. We talked about it all.

After making such a great connection, we were eager to see one another. With many opportunities in Atlanta for a Communications student like myself, Donovan knew that’s a place I could see myself living. He decided to take the extra mile and surprised me with the offer of a plane ticket to ATL. “Who does that?” That’s what I was thinking. It seemed crazy but I couldn’t help but accept. We had crazy chemistry and I really love Atlanta. Visiting a nice gentleman just put the icing on the cake.

After more prayer and consulting with friends and some family, I didn’t have any bad feeling about visiting Donovan. And once he greeted me at the airport with Yellow tulips, I hadn’t regretted making that trip either.

What really connected to me to Donovan was the fact we are comfortable talking about anything. We finish each others sentences. Plus even though we are miles apart, he’s always one call away. Just like many friends and family he’s been there to support through my recent struggles. I didn’t worry about anything. Anytime he called it would bring a smile. And I believe that because he acknowledges the value that I hold as a young woman. I think we as women tend to forget. And young men aren’t aware or they forget as well.

I remember reading this and I instantly thought of Donovan:

Best Moments upon my Arrival in Atlanta:

1. He snuck up on me at the airport with flowers

2. He took me to visit the beautiful shops and boutiques in Atlantic Station.

3.We visited the beautiful Piedmont Park where we had a sentimental moment. I knew there were some things I wanted to share but I waited til I was with him face to face to tell him. It definitely brought us closer, and he expressed how appreciative he is that I am here on earth to bless him with my presence. 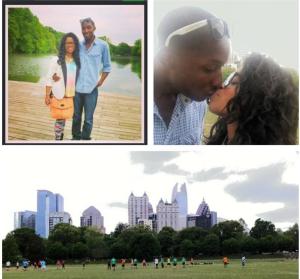 4. Experiencing Sundial. An exhilarating 85-second ride in one of our two scenic glass elevators will carry you 723 feet to the observatory View Level atop The Westin Peachtree Plaza, the tallest hotel in the Western Hemisphere. From this level, take in the breathtaking 360-degree panorama of the magnificent Atlanta skyline and gaze through one of our four complimentary telescopes for a bird’s eye view of the city. The View Level offers Atlanta’s best view of Atlanta and is the perfect place to observe Atlanta’s famed landmarks, stadiums and natural features, including Stone Mountain, CNN Center and Centennial Olympic Park. 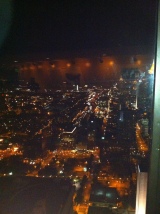 5. Even though the scenery at Sundial was amazing. Just incredible. There was a moment I will always hold onto. After we left Sundial we visited a nightclub then departed early and decided to enjoy the love in the air and take a nice walk outside. Donovan placed his dinner jacket around my shoulders as we strolled down Peachtree Street, hand in hand. We’d forgotten it was 2am, we’d forgotten people were around. We had moments where we’d just stop on the sidewalk or the middle of the street and just hold one another. It was a great feeling.

So just remember in order to receive the type of person you want in your life, you have to exude that same type of excellence for them to know how to address you. Donovan has been nothing but mannerable, respectful and encouraging. There were moments where he’d worry if I wanted more, but he’s just right. I encourage him along the way just as he encourages me. I definitely love he friendship that we’ve built and I can’t wait to see where this journey leads us. 🙂

#BTS with @robinrobertsgma She truly loved us. We love this AND her! Get your tee at booksnbros.com/shop ☺️
Happy. Grateful. Worthy. and Blessed. #gma Jumpsuit: @lafemmerebelleclothing
I was prepared to be interviewed. I was not expecting this morning to be THIS GOOD! We are so grateful. Thank you @goodmorningamerica @robinrobertsgma @wellsfargo and @penguinrandomhouse !! Books N Bros is going to flourish so amazingly! We can’t wait to get back home to our Bros!
Let’s get it. 2020 is already hittin different.
Sidney: Mama don’t we gotta board? Me: Our seats are already assigned and waiting for us. 😩🙌🏽*hotahshananah*
Heading out! ✈️ See you soon New York! Tune in tomorrow morning as we’ll be live guests on Good Morning America! What an amazing way to celebrate MLK Day. Keep us in your prayers. 💪🏾
Rule of Thumb: Tell your story before anyone else can.
“After talking to hundreds of founders, reviewing 90+ applications, interviewing 40+ entrepreneurs, and 800+ community members voting, we have selected 10 dynamic Black and Latinx entrepreneurs to join WEPOWER’s inaugural cohort of the Elevate/Elevar Accelerator. They are scaling tech, health, and construction companies. They are creating delectable vegan dishes. They are supporting boys across the globe with growing their literacy skills. They are St. Louis proud and committed to sparking economic development in areas like North St. Louis City. Companies accepted into our inaugural cohort will access connections, co-working, curriculum, and capital that will elevate their ability to be investment ready and scale their company to new heights. The potential, the commitment, and the incredible entrepreneurialism of our inaugural cohort is a story of possibility. We need YOU to join us. Sign up today as a mentor who works with one of the Elevate/Elevar Entrepreneurs: bit.ly/wepowerelevatementor. Meet the members of the 2020 Elevate/Elevar cohort!”
GOAT SZN. ✌🏽
You ever look at yourself like “Dang I look just like my mama!” I truly am my mother’s child. I appreciate every ounce of it. The beauty, the hustle, the grace and wit. I’m only getting better with time. 😌
They say my time is almost up, tell em I said, “Wish, wish". 😉 #31
My heart.
Somebody pour the champagne Yeah, that's just the campaign Everything we do, we do it big Riding on our own wave Whippin' in our own lane #thisis31 🎈
There’s nothing like waking up to encouraging words, cashapp gifts ($WinnieCaldwell btw 🤑) and a huge gift bag full of presents from bae. I’m so excited to see what 31 has in store! Thank y’all! Love y’all!
Village. 💙 A friend of mine said I’ve truly built a foundation of support for the kid and I. And everyone in the room still doesn’t encapsulate our entire village. We appreciate everyone near and far. I’ll be cutting onions for a while y’all. 🥺💙
Proud is an understatement. @church_314 these photos are amazing. 💙
Sidney’s reaction is everything. If you want to know how we feel about this journey, his motion embodies it. We are forever grateful. 💙💪🏾 If you haven’t tuned in yet, you’re missing out. Grab some tissues and head to Disney+ for the Marvel #HeroesProject. 🎥 @nyara.w
Loved. ❤️