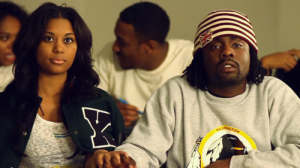 Just last night I was at a concert having the time of my life. Loud music. My favorite artists. And my friends. Every hip hop artist yelled “SINGLE LADIES SCREAM!!!” just joining in the crowd I must’ve screamed too loud. Once I charged my iPhone, and got a text that says I need to talk to you. Coming from a man or woman I don’t think that’s good on any level. My love broke up with me. Over a small issue that he has with himself that he won’t change. Yes it’s heart breaking. It seems life altering but I know I’ll make it. Us ladies have to appreciate ourselves. Don’t be so eager to jump into a relationship. I called myself taking it really slow. But just as women have standards I think we should have limits too. You say he must make x amount of money. But what’s his limitation? If he makes more than you require is there a limit on how he spends it or where? Just because he makes it doesn’t mean he will spend it on you. You say he mustn’t have any children. OK but what if he doesn’t want kids ever and you dream of a family? Let everything be known before you fall in too deep and end up in love with the image of someone else. And take responsibility for your actions as well. I will admit I believe I loved him since our first date. Sounds cliche? Dumb? Oh well love is crazy. But me looking forward to the future may have added a little too much rose tint to my glasses. I didn’t say anything about our future but I know my actions showed it. Whatever he needed I made time. I always considered his feelings. I always wanted to make sure he was happy, safe and comfortable. But maybe I went over the top as far as feelings. I’m only twenty and some change. I’ll just try to live freely and enjoy myself. God makes things happen for a reason. I have goals. Goals outside of my hometown Saint Louis. Which long distance would cause havoc in a relationship so I’ll say that Georgia or California (my dream states) may be calling me soon. Hopefully. Everything happens for a reason and I’m praying my reason is a opportunity.

“See, breaking up is hard to move along is even harder
It’s over she got colder now can’t locate where her heart is
And I’m just being honest, since we not even talking
My mind won’t let you go
Shit even considered stalking naw
You know I be teasin’ though
You know that my ego won’t
Thought this was forever love
Guess that was just seasonal”

I have gained more confidence, met more people and I have had more time to involve myself in my passion of writing. The people I have met and encountered I never would’ve thought would happen at a young age of 24. So was i hurt by being dumped? Yes as anyone would be. But do I hate him? No. Was he a bad person? Not at all. It just wasn’t meant. All I can say is Thank You because that was truly a blessing in disguise.

4 thoughts on “He Dumped Me….thank God.”